A woman from western PEI.

FORTUNE COVE, PEI — Ask Karen MacPhee how many tattoos she’s acquired over the years, and she laughs and admits she has no idea.

Although MacPhee, 53, is now a tattoo enthusiast, she wasn’t always. She has always enjoyed them, but her collection took a long time to get started. 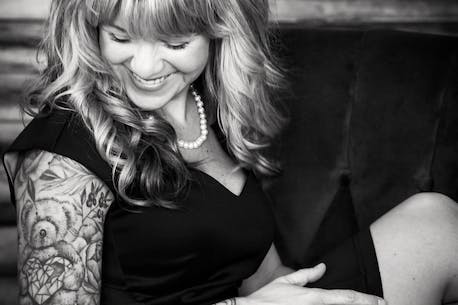 She got her first tattoo – a blue panther on her shoulder – in her late twenties.

Getting some ink was something she had on her mind for several years before, as tattoos had started to grow in popularity. She had no work of art in mind; she chose the panther while she was in the living room for her date.

“Everyone told me that once you have one, you’ll come back for more,” she said. “But I went there a long time before coming back.”

It wasn’t until 2012, more than a decade after her first, that she returned for her second – a horse on her ankle, inspired by her friends who got their own ankle tattoos.

“My goal is to stop needing a tan,” she jokes.

Although MacPhee has had tattoos for over two decades, the reason she got them has changed over the years.

When she was younger it was “just a tattoo”, something quick to decorate the skin. Today, however, she considers it an art form.

“It makes a lot more sense. The artwork is all the greater now,” said MacPhee, who strives for originality in all of her pieces.

When planning her new tattoos, MacPhee wants them to be as consistent as possible with her existing tattoos and always plans a tattoo or two in advance.

Skulls are a common theme throughout his art, including a horse skull on his leg. She has Nightmare Before Christmas-themed ink and a Halloween-centric headline – her favorite day of the year.

“I have a Ouija board and bats and spiders and all that stuff.”

In addition to the spooky, MacPhee also made room for art of more sentimental origins.

In 2016, shortly after going full throttle with her tattoos, MacPhee was diagnosed with breast cancer.

A self-proclaimed ‘live for today’ person, she took the news well and now has a pink ribbon and butterfly to celebrate her survival.

MacPhee’s most significant tattoo, however, is his father’s heartbeat. He died in December 2021, hours before one of MacPhee’s tattoo appointments.

“I kinda hummed and asked if I should go, and I thought, well, tattoos are kind of like stress relief for me,” she said. “Tattoo therapy.”

After years of following Inked Magazine’s cover girl contest, MacPhee took the plunge and entered the contest herself.

She was curious to see how far she could go, especially when competing against women younger than herself, as well as corporate-sponsored professional models.

Competing since mid-January, MacPhee finished second in her pool in the quarter-finals.

“I’m just amazed,” MacPhee said. “Honestly, I didn’t think I would do as well as I did.”

Mel Gregory, MacPhee’s ex-husband, had always supported her tattoos. When she entered the pageant, Gregory was eager to support her; he worked on her posters and videos and posted them on social media, encouraging people to vote for her.

One of the biggest obstacles, Gregory said, was people’s lack of familiarity with the contest.

“Most people here have never really heard of it, it was kind of new to them,” he said. “It took a little while for people to get the hang of it, but once they did, it was amazing the support she got. It was amazing.

Like MacPhee, Gregory was surprised MacPhee got as far as she did, but he can’t help but be proud.

“It’s pretty amazing for a girl here in PEI,” he said.

Although she didn’t win this year, MacPhee is keen to try again in 2023, seeing how far she can go a second time.

She is unsure, however, what she would do with the prize money, if she were to win, but said “it would be really awesome to do it”.

Kristin Gardiner is a rural reporter with the SaltWire Network in Prince Edward Island.