As tensions mounted between the United States and China over the origins of the pandemic, the Beijing Foreign Ministry spokeswoman tweeted a cover story from TIME magazine which she said illustrated Washington was ” the origin of the epidemic â€. The claim is misleading: The magazine article actually focused on a cluster of Covid-19 at the White House in October 2020. The first major outbreak of Covid-19 was recorded in the Chinese city of Wuhan at the end of December 2019.

Chinese Foreign Ministry spokeswoman Hua Chunying made the misleading statement in a tweet posted on July 17.

It reads: â€œLook back at what has happened since the outbreak: #China has done its best to bring the # epidemic under control nationally and has spared no effort to help other countries in the world with hundreds of millions of medical supplies, masks and 1/6 doses of #vaccines in the world.

In contrast, #US has seen more than 600,000 deaths and exported countless cases of infection and political viruses. As TIME’s coverage says, the United States is the biggest source of the virus and the origin of the epidemic. “

In the tweet, she shared a photo from the cover of TIME magazine from October 19, 2020.

It shows an illustration of virus plumes spewing out of the White House chimneys.

A screenshot of Hua Chunying’s deceptive tweet taken on July 26, 2021

The World Health Organization (WHO) has announced plans to audit Chinese laboratories as part of a further investigation into the origins of the coronavirus pandemic, angering Chinese officials. AFP reported on the developments here.

The cover of TIME magazine was shared with a similar claim on Twitter here and here, and on Weibo here.

The assertion is misleading.

The first major SARS-CoV-2 outbreak was recorded in the Chinese city of Wuhan at the end of December 2019.

China confirmed the first death from the virus in Wuhan on January 11, 2020, as AFP reported here.

In January 2021, the WHO sent a team of independent international experts to Wuhan to help its Chinese counterparts investigate the origins of the pandemic.

In July 2021, WHO chief Tedros Adhanom Ghebreyesus called for more studies of animal markets in and around Wuhan as part of the second stage of an international investigation into the origins of the pandemic.

A search of the Time magazine covers listed on the publication’s website reveals that the cover is from the October 19, 2020 issue.

The cover was published with an article titled: “Donald Trump’s COVID-19 Diagnosis Forces Him to Face His Personal and Political Vulnerability.” 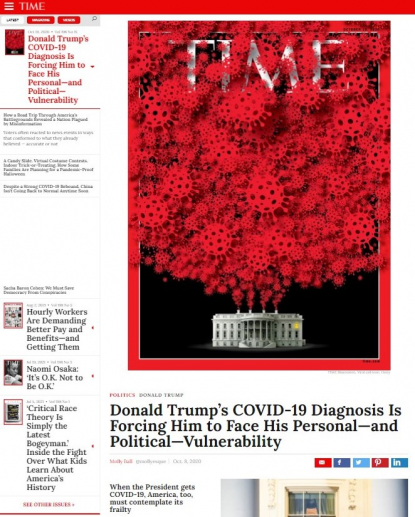 A screenshot of the cover of the October 8 issue of Time Magazine taken on July 26, 2021 (AFP)

The article criticized the handling of the pandemic by then-US President Donald Trump.

He questioned his decision to hold a White House celebration for the appointment of Justice Amy Coney Barrett to the Supreme Court in September 2020.

Trump “ridiculed the wearing of Joe Biden’s mask” and “winced when he saw assistants wearing masks,” the article reads.

There is no mention of the origins of the pandemic in TIME’s history.