I was speaking at a church leadership event when, during coffee break, I noticed a man standing alone and looking out the window. I approached and started to engage him in conversation. As he turned to me, I saw tears streaming down his face. He told me that he was deeply moved during my speech on criticism management. “I have someone in my church who is very hard to please,” he explained. “They recently wrote me about 30 things that are wrong with the church.” I smiled. “It’s quite a list. What did you do?” He said, “I answered and answered every one of them.” I sighed. “I’m not sure that’s a good idea. He looked puzzled. “Why not?” He asked. “Because your answer didn’t satisfy them, did it?” deep prophetic. “No. They just sent me another list. As he continued to tell me more about the situation, I felt it was a story I had heard many times: an account of the effect one negative person can have on an entire church. .

In truth, the problem was not that this church member had concerns he wanted to voice. No, the real killer was the vitriolic words in the accompanying email.

Some time ago, after seeing an email that had been sent from one student to another, authorities at Harvard University issued a statement: “This email is a violation of the standards of our community. I also believe that much of the communication we have with those inside and outside the Church is a violation of the standards of the Christian community. One MP, who was no stranger to criticism, commented to me on very derogatory emails sent to him by a group of Christians: “I don’t know what kind of God these people believe in, but there is no certainly isn’t compassionate and loving.

I’m sick of Christians sharing music videos, memes or GIFs about celebrities or politicians who have done something they don’t agree with. It’s disguised as protest but it’s often just mean

And it’s not just email. I’m sick of Christians sharing jokes, music videos, memes or GIFs on WhatsApp about celebrities or politicians who have done something they don’t agree with. It’s sometimes disguised as a protest against injustice, but, to be honest, it’s often just plain mean. It reminds me of a father who expressed his distaste for the lifestyle of a well-known television personality. His son said, “You know, daddy, you say you hate the sin and you love the sinner, but sometimes I wonder if you really hate both.”

Not long ago a man, his face drawn with pain, showed me correspondence sent to his son who is involved in the Christian ministry. Some people disagree with the new direction the organization is taking and have said so – nothing new or wrong with that. But what hurt this father so much was the sheer venom contained in some of the emails, one of which accused his son of an alliance with Satan.

I think one of the problems we face today is that digital technology has made it so easy to say harsh and hurtful things quickly. I recently overheard a politician comment that many of the complaint emails he receives come in the late evening. He said: “I think what happens is people watch the ten o’clock news and feel they have to write to their MP immediately. I’m sure before the ease of email, people would sometimes write a letter, leave it on the mantelpiece for a few days, then maybe decide not to send it after all. Of course, it is important that people put pressure on their MPs, but I sometimes wonder if, in the cold light of the day, some of my fellow citizens regret some of the things they wrote the day before. A friend once advised me never to send a critical email late at night when I’m tired. Maybe he’s right.

THE LAW OF LOVE

Sometimes hasty communication will take a heavy toll on our most intimate relationships. A reporter has told how years of love and affection in her family were shattered by thoughtless social media posts. She admitted: “The truth is, I’m far more likely to rush a friend email or text a friend who’s offended me than to take the time to have it face to face.” As she pondered why she and others were doing this to each other, she concluded that the instant gratification of “taking it off your chest” is so great that it often outweighs considerations of perspective, kindness and even common decency.

The apostle Paul was not one to hold back when he felt harsh things needed to be said, but one senses a deep reluctance to hurt unnecessarily. It cost him something to use harsh words. In one of his most critical letters to the New Testament Church, he wrote: “For I have written to you with deep distress and anguish of heart and with many tears, not to afflict you but to make you know the depth of my love for you. (2 Corinthians 2:4).

A lack of the love that Paul spoke of sometimes shows up when we see those with whom we disagree falling on hard times. The Germans have a word for appreciating the misfortunes or mistakes of others: schadenfreude. Unfortunately, sometimes I see schadenfreude In the church. Maybe we hear that a Christian leader has made a moral mistake and we somehow convince ourselves that it is our duty to educate ourselves on every element of it. We scour the web for more details and then discuss it with other Christians. Or it may be that a thriving local church (more “successful” than ours) is going through an all-powerful split. We talk to some who have left and ask them for details, we speculate on what we don’t know and talk about it – a lot. We can disguise our various conversations as “Did you hear the sad news…? or “Let’s pray for…” or (if we’re particularly unkind): “Well, let’s hope they learn from this.” We do it in church, we do it in cafes, and we do it on social media. The Old Testament sets a high standard in these areas: “Rejoice not when your enemy falls” (Proverbs 24:17). And the New Testament simply says, “Love takes no pleasure in evil” (1 Corinthians 13:6).

A friend once advised me never to send a critical email late at night when I’m tired.

Of course, it is not always wrong to talk about these situations – especially if it is part of our responsibility to protect the victims – and, after all, we are called to pray for those involved. But we must avoid an attitude in our hearts that is secretly satisfied when those with whom we disagree theologically, who seem to have experienced greater blessings than ours, or even those whom we simply dislike, go through difficult times. troubled.

James makes it clear: “Don’t belittle yourselves, folks. It is the Word of God, his Message, his Royal Rule, which is undermined in this kind of talk. You are supposed to honor the Message, not write graffiti everywhere” (James 4:11, The Message).

We all need to learn to accept criticism. And there are times when it is right to give it.

You can piss me off. You can do things, write things or say things that I consider to be wrong. And I may decide to tell you what I think of all this. It may be absolutely necessary for me to do so. But we must know that the stakes are high when it comes to our words. Proverbs 18:21 says, “The tongue has the power of life and death.” Jesus’ warning that everyone must give account for every unwise word is worth pondering. We all dread the possibility of hitting “reply all” by mistake, but even if we avoid this false pax or delete all the critical emails we have sent hastily, our words will never be completely erased. He still has a copy. 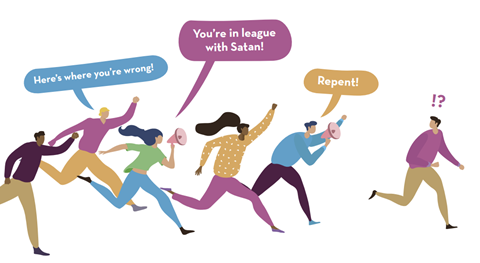 Don’t hesitate to give or receive criticism when it is useful. But it’s worth remembering that our reviews usually fall into one of two categories. First, there are those who sincerely desire our good. They criticize to make us better, to keep us from running too fast or falling into foolish pride. What they say may hurt us, but we need them. The Bible says of this kind of criticism, “Faithful are the wounds of a friend” (Proverbs 27:6, ESV).

Those in the second category are not on our side. They do not criticize to edify us, but to bring us down. We can try to satisfy them by changing, but the truth is that we will never please them; they don’t want to be happy. If we fix one problem, they will move on to another. We’d be wise to take a moment to think about what they’re saying — there may be a useful grain of truth in that — but we shouldn’t live our lives always trying to make them happy. It will rob us of both joy and efficiency. This is the person who comes to the pastor on a Sunday morning and says, “A lot of people in this church are very concerned about youth work and worship style.” When the pastor asks, “Who are these people?” they receive the perpetual response from the malevolent critic: “Oh, I can’t give you names.

This is how Professor Lewis Smedes paraphrases Paul’s wisdom in 1 Corinthians 4:3 on dealing with criticism: “You will measure my conduct and judge me, I know it, and when you do, I will listen to you. I know that you will measure my work; when you do, I will consider what you say… What you say and what you think of me matters to me. But I want you to know that after wrestling with my own conscience, after consulting my own beliefs, and after making my decisions, your judgment won’t matter much. It counts a little, but not a lot… I will not confide my case to you.

There are times in all of our lives when we are rightly criticized and we have to be big enough to take it on the chin. But there will also be times when we believe the criticism is unfair, mean, and maybe both. In times like these, I rejoice in something the late David Pawson said to me: “Critics can be harsh and rumors can be harsh. The other day I said to God, ‘These rumors hurt,’ and I felt him whisper to me, ‘Well, David, they’re not as bad as the truth. And I know the truth and I still love you. 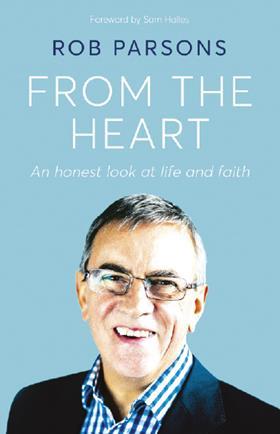 This is a review well worth receiving.

Rob’s latest book is From the Heart: An Honest Look at Life and Faith (Hodder & Stoughton) which brings together a rich collection of articles, most of which were first published in Early Christianity

Receive a FREE copy of Of the heart when you subscribe to Early Christianity magazine.