Find the Missing Pieces of the Christmas Puzzle | Magazine Features

Bible literacy in the UK is at shamefully low levels. In a 2014 YouGov survey, around a third of respondents thought the Harry Potter story came from the Bible, while just under half had no idea Noah’s Ark was.

Forty-three percent of children ages 8 to 15 had not heard the story of Jesus’ death and resurrection. However, thanks to school nativity scenes, Christmas carols, and the odd religious-themed Christmas card, most people still have a good idea of ​​the events surrounding the birth of Jesus. Told in the Gospels of Matthew and Luke, the story is covered in just 120 verses: a young Mary is visited by an angel and becomes mysteriously pregnant. Her horrified fiancé, Joseph, is only convinced to stay with his fiancée by a heavenly dream. Mary visits an older relative and is reassured that she is doing God’s will. They travel together to Bethlehem for a census, discover that there is no room at the inn, and the baby Jesus is born in a manger. There, they are visited by some shepherds and wise men from the East, whose arrival alerts King Herod to a potential rival.

What’s the puzzle? you might ask. It’s all so familiar and somehow contained within its own tight narrative structure, with a clear beginning, middle, and end.

But this short story, while of overwhelming importance, is part of a much bigger story.

Consider three major biblical themes, and how they fit around the Christmas puzzle piece, together creating a much more complete picture: creation, catastrophe, and crescendo. This all might seem rather scholarly and remote as we prepare for Christmas 2021 in the darkness and drizzle of a British winter. But we too are part of this puzzle. And as we see ourselves in the picture, our experience of December 25 and the days around it will become richer than a Christmas pudding slathered in brandy butter.

How many times do we hear that Jesus was born to save us from our sins, without even wondering why he would do that, given how wrong God’s people were in year zero BC? The Christmas story, taken out of context, becomes all about sin – and there’s still enough to coat the whole pretty nativity scene with grime. As we slide into another year’s buffers, 4.3 million children in the UK live in poverty, half a million more than five years ago. We have just under 80,000 people in our prisons. Drug and alcohol related problems are at an all time high. And we keep on consuming

although we are not already living in a climate crisis, causing untold human suffering and mass extinction around the world.

Jesus did not come into existence at birth or cease to exist once he ceased to walk the earth. The world he came to save is the world he created. The Christmas story does not begin with the announcement of Gabriel or when Jesus was conceived in Mary’s womb. It begins where John’s gospel does, with the Word, which was there in the beginning: “By him all things were made; without him nothing was done of what was done” (John 1:3). 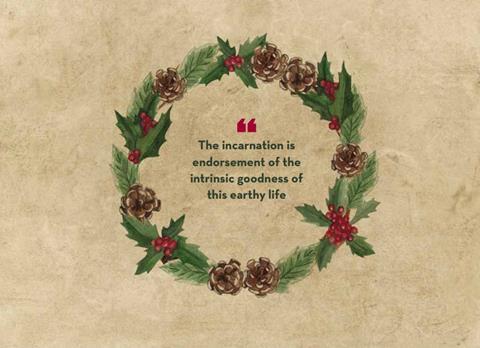 It is an essential piece of the puzzle because without it we have no idea why God would choose to deprive himself of power, privilege and comfort and take on vulnerable human flesh. When we return to where it all began, however, it becomes crystal clear. Creation was made by God to express and reflect his glory – which, despite all the damage we have done to it, continues to do so; it has been made good: not just moderately good, but extremely, extremely good, magnificently good. For all these reasons, it is worth paying the ultimate price to save.

We often have a discussion in our family around October about whether we really should do Christmas differently this year. My Christmases have always been about feasting on turkey, stuffing, gravy, vegetables, blanket pigs, tarts, chocolates, puddings, Christmas cake, and tangerines. They included heaps of presents, people, cookies, Christmas carols, board games and a large, glittering Christmas tree. Is it simply too excessive, selling off for consumption and secularizing a sacred feast? I’m sure we’re right to ask the question, and there are certainly ways to simplify things, especially when it comes to the mountains of packaged stuff we give ourselves. However, a warm celebration is perfectly appropriate to mark the birth of Jesus. The incarnation is the approval of the intrinsic goodness of this earthly life of ours, with its meals and its drinks, its feasts and its fasts, its working days and its sabbatical rest.

This Christmas, note with gratitude the abundant red holly berries, more than enough to feed our winter populations of feathered friends. Smile at everyone who bumps into you at the cash register or cuts you off in traffic: they are so loved by God that a baby was born to save them. Savor every bite of your Christmas dinner: God has created a world full of delicious food and once again given us our daily bread (and more). Start the Christmas story at Genesis 1 and see what it does to the picture.

On the heels of creation came the Fall, and with it all manner of horrors. You must feel strong to read certain sections of the Old Testament, with their gory tales of the many creative ways humans can harm themselves, each other, their environment, and God Himself.

The birth of Jesus was the sign of an ardent hope that all was not lost: the long-awaited savior of the world had finally come. Every best intention we have around our Christmas festivities is symbolic of this hope. We light candles and string lights to pierce the darkness as Christ did. We give gifts in memory of those he has received. We reunite with family and friends, her love for us spurring us to love old Auntie Eileen and the neighbors son who is still drunk.

Is it any wonder that there isn’t a time of year when the cold truth of our lived reality hurts so much? There is a gaping chasm between the scenes played out in supermarket advertisements and what happens behind closed doors. This year we are a nation suffering massive grief and trauma from Covid-19. Our economy and our health care system seem to be shaky. We are anxious, exhausted and alone. We are angry, sad and lost. We can well ask ourselves: what help was the birth of this baby after all? Does Christmas have any relevance for us today? 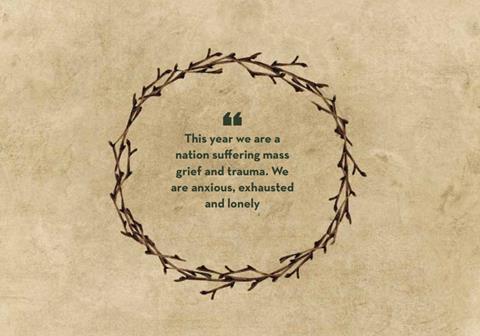 First, remove the tinsel and sequins and review the story: a single mother gives birth, far from home, in a pet store. Shortly after, a mass slaughter of all baby boys unfortunate enough to be born around the same time as Jesus takes place. His early years were spent as a refugee in a foreign country.

As a child, December 26 was, consistently, the worst day of the year for me. The year built, in bubbly anticipation, towards my birthday on December 18 and the glories of Christmas Day a week later, so the crash was inevitable, I suppose. I woke up the day after Christmas feeling flat and empty, like nothing good would ever happen again.

The people of Israel had waited for a Messiah for hundreds of years. Prophetic clues were passed down from generation to generation as they scoured the horizon for his arrival. He would be born of a virgin (Isaiah 7:14), in Bethlehem (Micah 5:2), of the tribe of Judah (Genesis 49:10) and he would spend a season in Egypt (Hosea 11:1). And then Jesus was born, and while there is a sense of a climax to the story here, the story is not over. It continues. And on. We are still here today, and on particularly gray days when levels of pain and disappointment are high, the birth of Christ can seem like an insignificant event in history. But this is not the case.

Just as the Christmas story begins at creation, not conception, its crescendo is not a crowning achievement but a glory to come. The story spans from the beginning of time to its conclusion, and its climax is the fulfillment of all of God’s promises in Jesus. The best picture we have of what this will look like is in the book of Revelation. Exiled on the island of Patmos, the apostle John had visions of Jesus: “His face was like the sun shining in all its brilliance. When I saw him, I fell at his feet as if dead. Then he put his right hand on me and said, “Don’t be afraid. I am the First and the Last. I am the Living; I was dead, and now look, I’m alive forever and ever! And I hold the keys of death and of Hades” (Revelation 1:16-18). 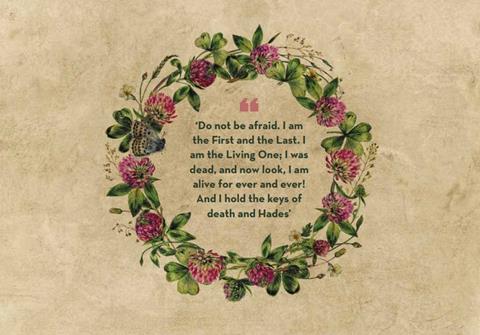 The baby born in a manger grew into the man called Jesus. He brought healing and comfort to many, healed the lepers, made the lame walk, gave sight to the blind, and restored loved ones to the afflicted. He showed us that God’s heart for suffering is compassionate and full of love. But, even then, there were unspeakable multitudes who could not approach him, who missed him by yards or minutes and whose suffering was undiminished. The time had not come to put an end to the troubles on earth. And that’s still not the case. 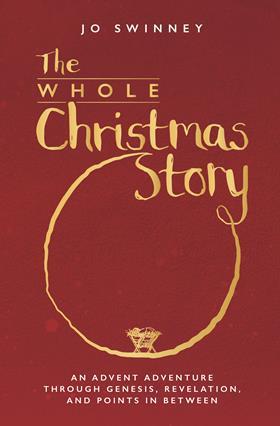 If, like me, you drink gallons of mulled wine this time of year, maybe you can relate to this story: Jesus told a woman at a well in Samaria that what she needed was not mulled wine, hot chocolate with a dash of Baileys, even water, but living water that “[well] until eternal life. (John 4:14) Thirst is the strongest of human drives; we were created with an innate need for what we need to stay alive. But Jesus identified a far a greater need – for an endless life with God. Our spiritual thirst drives us to seek God – and he has promised to be found. While we live on “the first earth” (Revelation 21:1), we will pass through vast, barren deserts in our spiritual experience—times when we cannot see, smell, hear, or sense God in any way. Our furious thirst will not be quenched. But, if we persist, we will eventually be satisfied with the “welling water of life” (Revelation 21:6), whether here or in the world to come.

We are used to a Christmas jigsaw puzzle made up of pieces detailing angels, donkeys, shepherds, wise men and a baby in a manger. But these additional pieces – creation, catastrophe and crescendo – create a picture that not only makes sense of these other rather random details, but also of the details of our own lives and of the universe itself. In the end, everything fits together rather perfectly.