How to raise anti-racist children and grandchildren | Magazine Features

My first experience of overt racism is indelibly etched in my memory. I was about eight years old; it was summer vacation and my mother had dropped off my twin sister and me at the municipal swimming pool.

After we finished swimming, we sat outside on the bench at the bus stop to wait for mom who was coming to pick us up: two little dark-haired girls alone. Suddenly, a car carrying two men tumbles down the road. As he passed us, he slowed down and I could see the window was down; one of the men shouted something. It was scary, but we couldn’t understand what he said over the car engine.

To our surprise, we saw the car come to the end of the road, turn around and come back towards us. We moved a little closer as they closed in on us. Now their words were loud and clear. They spat them out, faces twisted and angry: “Go back where you came from, Pakis!” Then they screamed.

We sat there terrified; shocked that two grown men yelled at us, amazed that they took the time to turn around to make sure we heard their insult, and confused at being called ‘Pakis’.

My sister and I are mixed-race: our father is black, from Saint Lucia in the Caribbean, and our mother is white, from London. Why did these men think we were from Pakistan and why would that be an insult anyway? Luckily our mother arrived moments later, but I will never forget the feelings I felt that night as my mind replayed the event. It was a mixture of confusion, fear and growing outrage.

I have experienced many racist incidents since that day, but it was the first time I realized that I would be treated differently because of my skin color.

Growing up being a brunette, like every other black or brown person you talk to, I just learned to toughen up, be resilient, work hard and keep living despite the odds stacked against me. . For people of color, sometimes an obvious incident is a stark reminder of our disadvantage.

Or, more commonly here in the UK, subtle micro-aggressions or lack of representation undermine our confidence and undermine our abilities. I remember such an incident in elementary school, when I wanted to be the fairy princess in the school play.

I can’t remember the words the teacher used, but she and the other children made it clear to me that I couldn’t be the fairy princess – and the reason was obvious. Instead, a blonde-haired, blue-eyed girl got the part. I must have only been five or six years old, but I remember realizing that it was something to do with my appearance; that I wasn’t beautiful or special enough to be a fairy princess.

EDUCATION ON RACISM MUST START AT HOME

Any parent will tell you that the number of thoughts, questions, scenarios, fears and anxieties that fill your mind as the birth of your child approaches is quite overwhelming. When I became a mom, thoughts that had never occurred to me before kept me awake at night, such as: What am I going to teach my son about religion, sexuality, injustice and, above all, race?

Who could I tell him he was and how could I help him make that his own? We want to teach our children well. We want to do better than our parents. We want them to have the freedom to make their own choices, but to make them good and healthy ones.

Since my son was born, I have tried to include his heritage in his upbringing where I could but, honestly, I failed in many areas. Some failures are due to my son’s lack of exposure to the dark side of his family (there are literally none left in England now that my father is dead) and some are due to things I took for granted.

In 2020, the resurgence of the Black Lives Matter movement following the murder of George Floyd was an opportunity to open up conversations about race with my son and my friends. It was like ripping a bandage off an old wound and finding that it hadn’t healed as well as I thought.

It revealed wounds that I had carefully hidden from my conscience. But it was also interesting, encouraging and sometimes heartbreaking to see my friend’s responses – especially those of my white friends. For many of them, a light suddenly went on in their head; they expressed their grief at how oblivious they had been to my experience as a non-white person.

Many have pledged to do the work of rehabilitating themselves now that their eyes have been opened to racism. Many have also reached out with questions and concerns. It was an emotionally draining time, but I felt I was seen and heard, and I was filled with more hope for real change than I had ever been before.

A friend who reached out to me was Ruth Hill, with whom I eventually co-wrote Talking to Children About Race (SPCK). I was so impressed with how she approached the conversation, as well as what she was asking, that (with her permission) I shared her message publicly on my Facebook feed. Many people saw this message and as a result we were asked to write the book.

Our intention was not to preach, condemn or slap; rather, we hope the book will be a reassuring arm around the shoulder of anyone who wants to learn and grow from just being non-racist to being anti-racist, and who wants to help their children do better than our generation and those before us. .

What is the difference?

But why is it important? Why do we have to be anti-racist and what does that even mean?

To be “non-racist” one might watch a racist incident happen and exclaim how outrageous it is, confident that we would never do the same.

Being anti-racist means not only witnessing this behavior and condemning it, but intervening and confronting it; to stop it if we can or, at the very least, to support the victim by checking on them and helping them resolve the incident if they wish.

In short, being “non-racist” is passive; being “anti-racist” is active. I hope most Christian parents and caregivers aren’t racist, but whether they are anti-racist is a whole other question.

Before we can talk to kids about race, we have to do the hard work of confronting, learning, and grappling with some of these issues and topics ourselves. None of us like to admit our least attractive traits but, if you are a person who wants to do better – for yourself, your children and grandchildren, then it is necessary to confront them.

We have to know what we are doing wrong before we can do it right. being honest about the biases – conscious or unconscious – that may exist within us is a good place to start.

Think of a few scenarios and question your motivations. We must first recognize these thoughts within us, recognize them, challenge them and dismantle them, and then we can work to change them:

When considering talking to our children about issues of race and racism, it can be helpful to think about how they perceive their place in the world as white or non-white children. What have they already noticed or experienced? You might be surprised. Children very quickly understand the behaviors and attitudes of those around them. 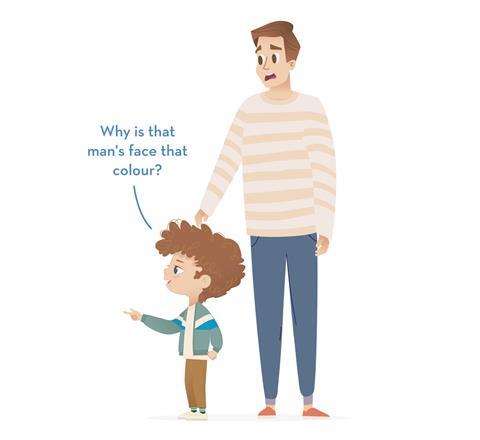 They learn by watching, and they may have already learned more from how you react to certain situations than from what they have heard you say. While you won’t use racist language or tell your kids to treat people of color differently, they will notice how you interact and react with different people. We can underestimate children and forget to just ask them what they think and know. The work against racism must start when they are young.

I DON’T THINK PEOPLE ARE NATURALLY RACIST OR BORN TO HATE OTHERS, BUT IMPLIED RACIST MESSAGES START AT A SCARY AGE

We must remember that teachers may not know or do better than us, so education about racism must start at home. We need to spark these conversations and not delay them. We need to tell our children the truth about racism. We begin this process by confronting and questioning our own thoughts, feelings, and behaviors. As the novelist James Baldwin said, “Not all that is faced can be changed; but nothing can be changed until it is confronted.

When we talk to our children, we need to encourage them to question us because they too can help us expose our own biases and unconscious biases. Our children are wise and knowledgeable; they are increasingly taught to accept people as they are, regardless of race, gender, or other elements of identity. They can help us be better, just as we help them. To remember:

Buy books with black heroes or heroines (not just non-white sidekicks) and those that educate children about black history and champion black historical figures. Make sure their toys represent a diversity of people. Try to eliminate the notion of “other” as much as possible and integrate diversity into your daily life. 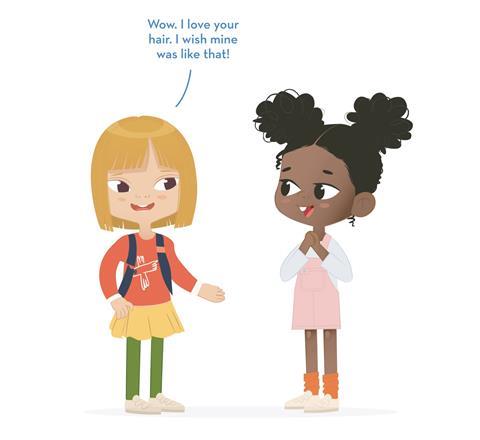 Some people think it’s racist to emphasize color and prefer to pretend they’re blind to our differences. The only time I think color blindness comes into play is with very young children. I don’t think very young children attach meaning to skin color, and even if they express a curiosity about difference, it’s just that, a curiosity that enables learning.

Racism is learned from the attitudes of others and societal messages, both implicit and explicit. But it is important to emphasize that children’s indifference to skin color does not mean that they do not “see” it; they just haven’t learned to attach negative connotations to it…yet.

Children have the right to ask questions and they should never be ashamed to do so. Instead, their questions should be viewed as teaching opportunities. Granted, children often pick the most awkward time to ask a question, but try not to be embarrassed and answer with confidence.

I don’t think people are naturally racist or born to hate others, but implicit racist messages – such as what is and isn’t attractive, beautiful, desirable, popular or preferable – start at a scary age. And that’s why we need to start talking to our kids about race and racism while they’re this young.