NewJeans stuns on the cover of ELLE Korea’s first of its kind, SUPER SHE. This is a special edition of the magazine where only the rookie girl group will be featured on its 48 pages!

The post also shared the Pictures members of the girl group, showing off visuals for its September 2022 edition. ELLE Korea also shared a short video of each of the NewJeans members for the photo shoot. The video is a very close shot of the members, clearly showing their faces.

This photoshoot was done in partnership with Chanel Korea.

A leqoo post shared the news about NewJeans photoshoot for Super ELLE and the final result for each of the members. As expected, each member of NewJeans was praised for their beauty.

“Wow, they are so beautiful, Hyein came out so well”

“Wow the kids are all beautiful, Danielle looks like a Netflix poster”

“Hyein’s star factor is so huge. She looks like a model, so does Minji”

“Wow, the charms of children are crazy and all 5 are all differently beautiful and charming”

According to a reportinside the magazine are the individual photos of NewJeans with comments for each.

“Whenever you see your friends working hard in their respective fields, you admire and encourage each other. I want us to be a close group of friends like that.”

“My most authentic self emerges when I’m doing the work I love. I think it’s essential to let go of the mindset of perfection and focus on having fun.”

“I’m happy every time I see someone enthusiastically show our songs. I want to continue to be an artist that fans can confidently say they love.”

“Naturalness” is the unchanging identity of NewJeans. I want us to be a team that can only be described by ourselves.”

“To do the work you love for a long time, I think you have to move forward with an image that is most true to yourself. I want to promote while still being that way and having fun.”

NewJeans members talk about their debut

There is also a short interview after the photo shoot where a SHE staff spoke to members. They were asked what they looked forward to most before becoming an idol.

Minji said she really liked music shows. To be able to play in one of them is such an honor for her. She also added that she was nervous at first about meeting their fans for the first time. But everything went well so she was really happy. 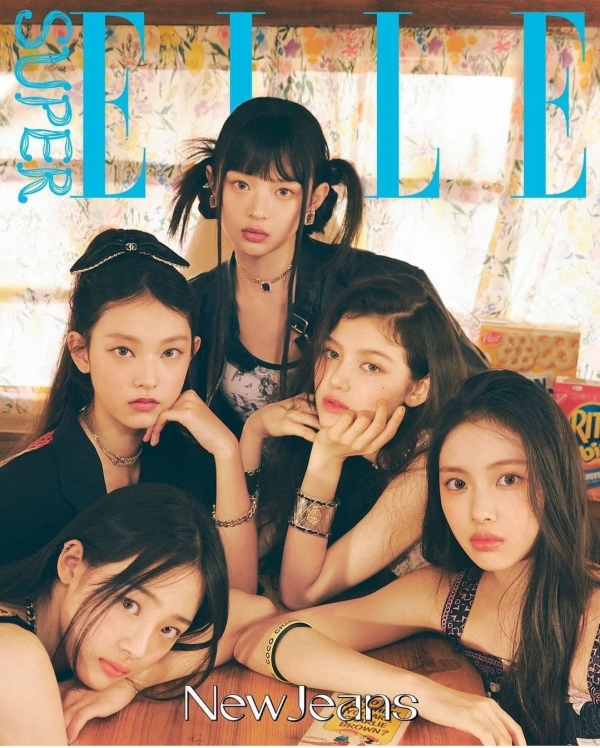 (Photo: NewJeans-Twitter)
NewJeans on the cover of the special edition of Korean magazine SUPER ELLE

Their half-Vietnamese, half-Australian member also shared that she wasn’t really good at typing Korean before. It’s a good thing its members are all nice and have gone out of their way to help it improve, she added.

Meanwhile, their maknae Hyein shared that her unnies (older sisters) always take good care of her. They always ask her if she’s okay or feeling okay, thanking the members in return.

[#UPDATE] NewJeans on their way to Music Bank this morning! #NewJeans @NewJeans_ADOR pic.twitter.com/8IjCGHCAlr

On the other hand, NewJeans will be performing on Music Bank today. Make sure you don’t miss this one!